United Way and APSU teamed up to kick-off the 2017-2018 Campaign! For a pre-game warm-up campaign coordinators from local workplace partners gathered inside Fortera Stadium for a “Breakfast of Champions” and campaign “training camp”. 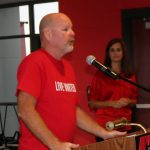 hey arrived and United Way Board President Garnett Ladd welcomed them to the event.  “When you give to United Way, you help us change the game,” he encouraged. “We’re here to thank you for being an important part of United Way’s team and to ask for your help in scoring this year’s campaign goal.”

“United Way fights for the Education, Health and Financial Stability of every local resident in our community.  We’re here today to kick-off this year’s giving campaign, but we are more than fundraisers.  We are the hand-raisers. The game changers.  United we fight and united we win” said Ginna Holleman, local United Way CEO.

Guest Speaker and APSU Football Head Coach Will Healy shared an inspiring message with attendees.  “Our first priority is to positively shape the lives of the young men who play for the Govs.   From the ages of 18-23, we have the opportunity to set an example of being husbands, fathers and role models.   I may fail at winning a game, but I won’t ever fail at this. The majority of our players come from single parent families.  For some, we are their only family.  They come here and join this team because they want to be part of the culture we have at Austin Peay and that starts with taking care of each other and our community. Like United Way,  we believe strongly in this responsibility and it’s always at the forefront of our hearts and our program,” said Healy.

Then amidst the excitement of a Govs victory over Morehead State, United Way of the Greater Clarksville Region challenged the community to help score big wins for those in need.  During the record-breaking game, representatives gathered on field at Fortera Stadium to rally support for this year’s “Game Changer” campaign.  With the help of Govs cheerleaders, United Way announced its 2017-2018 campaign goal of $1,100,000.

This year’s campaign aims to inspire individuals to surround our community’s most critical problems.  “United Way needs you to join the fight,” urged Jim Manning, 2017-2018 Campaign Chair.  “We can’t sit on the sidelines.  We all have to get involved to make a difference in this game of life.  Your support, expertise and resources help our fight become a win.  A win that’s not just a short-term contribution, but a long-term solution.”

For additional photos of the Breakfast of Champions, click here.